If you’ve ever been to Schnappa Rock Restaurant, you’ll know why it’s a favourite of Tutukākā locals and why it’s the place of long-lasting memories of many visitors to the area. Owner Nick Keene and his team have been serving up delicious meals and great service from more than 16 years at this harbour-side icon. Most recently though, they have been quietly celebrating the now year-round supply of fresh produce they receive from their very own restaurant garden.

Tim and Nick with a fresh delivery

More than six years on from sowing the first seeds, Nick is proud to celebrate the flavour and freshness of local produce on his menu. But what may not be so obvious is the inspiring relationships developing between his chefs and gardeners which is encouraging innovation and creativity on the plate.

The garden was established after Nick was introduced to Tim, a colourful character of Scottish descent who, after a rough ride in life was ready to turn things around for himself. They hit it off and before long, found themselves standing on Tim’s property in Maungatapere, discussing a plan that they hoped would eventually provide fresh ingredients to Nick’s coastal restaurants (he also owns Wahi Restaurant at Oceans in Tutukaka).

While Tim’s biggest passion is pig hunting, he has a natural love of the land and over time has been following organic and permaculture principles to turn his unused volcanic land into a thriving and productive garden. When Nick and Tim asked Tim’s son James to consider working in the garden after he finished his final year at school, James decided to give it a go. “He’s become a really important part of the operation” says Tim. This gardening duo are now a natural extension of the restaurant kitchen team and one look at the enticing Instagram account of Schnappa Rock’s Head Chef Dean Thompson, is enough to see the inspiration coming from the paddock to plate relationship. 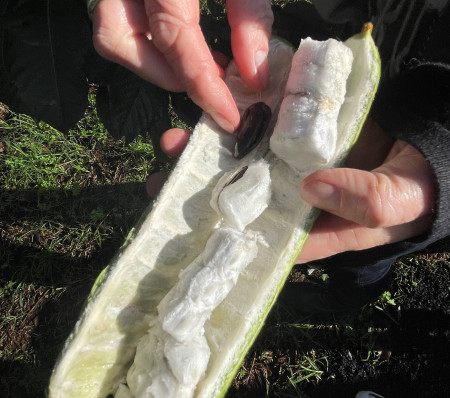 “The freshness and flavour we get from these ingredients is second-to-none” enthuses Dean, “It constantly inspires us to create new dishes that celebrate the best of the season”. We always share customer feedback with Tim and James and get them out for a meal regularly too. Nick admits it’s taken significant investment to get the garden to this point, but he is seeing benefits far beyond the practical. “I couldn’t have planned for the friendships that have formed and how this drives us all to do better, which is pretty much priceless” according to Nick.

Anyone who knows Nick will tell you he is an important part of the Northland hospitality scene. He’s humble but will often be found working behind the scenes on many projects that help to develop youth, support the wider community, and improve environmental sustainability. While not a new concept, it’s his approach to the restaurant garden that is a symbol of a longer-term approach that allows for growth and development along the way.

So if you’re looking for a great Northland foodie experience make sure Schnappa Rock is on your list, and be sure you ask the friendly team about their daily specials to get a taste of the freshest inspiration.