Kaipara District Council has confirmed sunflowers and squash for the second growing season of the Kaipara Water demonstration sites.

The two sites are located at Te Kopuru on private land, and further north at Maunganui Bluff on iwi land. Both are set up as practical working examples of the ways in which different irrigation techniques can support land diversification and higher-value crops in the Kaipara. Council has contracted Northland Inc to manage both sites.

Squash was chosen for Site 1 after consultation with Te Roroa, who own the land at Maunganui Bluff. The squash crops will be watered using sprinklers, with a control area set up with no irrigation on the crops.

Snow Tane, Te Roroa General Manager Operations says Te Roroa is keen on sowing squash as it has export potential as well as the ability to feed those closer to home.

“There are currently no registered growers of squash in Northland, so if this season is successful we will certainly be looking to grow squash on a bigger scale. We are always looking to diversify our mahi and it looks like irrigation in this instance may help us do that.”

“We know squash needs two things to grow well – a frost-free site and a constant supply of water. There are no frosts in Kaipara from October to March so that’s an automatic tick, and with the sprinklers we have in place we can tick that off too and grow with more certainty.”

Delica is an adaptable hybrid kabocha squash. The fruit is vine-ripened, sweet and flavourful, maturing 45-50 days after flowering, and hand-picked from December through to June. Kabocha is an Asian variety of squash, sweeter than butternut squash with a firmer, less watery flesh. It has less calories than butternut squash, and has an edible rind once cooked.

Come November, visitors to the Te Kopuru site (Site 2) will see the first green stems of high-oleic sunflowers reaching for the sky. The site hosts a 242m centre pivot irrigator, which can irrigate up to ten hectares. 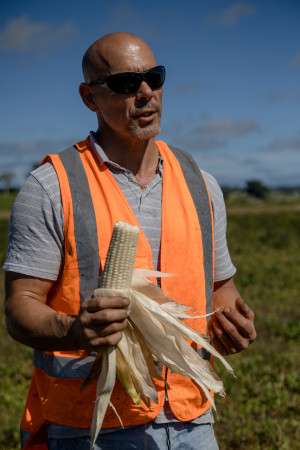 Greg Hall of Northland Inc and the site manager for both demonstration sites, thinks this is an opportunity to show that Kaipara could grow high yields of sunflowers with irrigation. Sunflowers are currently grown in Northland for animal consumption only.

Soybean has traditionally been the primary source of lecithin worldwide; however, sunflower lecithin is naturally free of gluten, soy, and dairy, and is a promising non-GMO product alternative. Irrigation has proven in some instances to increase sunflower production and yield.

“Non-irrigated sites that are dry when planted out have shown significant delays in the emergence and early growth of sunflowers when sown in November. So we hope that there will be a big difference in growth and yield between the irrigated and non-irrigated sections of the site, demonstrating a larger yield with the right smart-water use.”

There will also be a shoulder crop grown in December to demonstrate higher yield when irrigated over the peak summer months.

Updates and further information including site photos and documentation can be found online at Kaipara Water.

For any queries about the project please email KickStart@kaipara.govt.nz